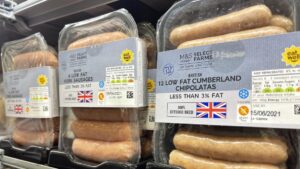 The UK and the EU have announced a truce in the battle over a post-Brexit ban on British-made sausages being sold in Northern Ireland.

A grace period, allowing chilled meats to be carried across the Irish Sea to Northern Ireland, has been extended by three months until the end of September.

But in a sign that the deal may only have deferred rather than solved the row, the UK suggested the extra time would allow a “permanent solution” to be reached in which British sausages can continue to be sent to Northern Ireland.

The differing interpretations of the Northern Ireland protocol have become a major source of tension between the UK and the EU since Brexit. It has introduced significant barriers to trade between Great Britain and Northern Ireland, something unionists in the province see as a major change to the constitutional order.

Announcing the deal, Lord Frost, Boris Johnson’s Brexit minister, said: “We are pleased we have been able to agree a sensible extension on chilled meats moving from Great Britain to Northern Ireland — one that does not require rules in the rest of the UK to align with future changes in EU agrifood rules.

“This is a positive first step but we still need to agree a permanent solution. Northern Ireland is an integral part of the United Kingdom and its consumers should be able to enjoy products they have bought from Great Britain for years.”

He said that the issue of chilled meats was “only one of a very large number of problems with the way the protocol is currently operating”. The government has submitted a dozen papers to the European Commission about other problems with the protocol, including medicines and the movement of goods.

The EU is likely to argue that the only way to ensure chilled meats from Britain can continue to be sold in Northern Ireland would be for the UK to align with the EU on foods standards, something the government does not want to do.

Maros Sefcovic, the European Commission vice-president who is negotiating for the EU, said the extension was not a “blank cheque” and was only to be used for changing the supply chain to eliminate the trade in sausage and chilled meats across the Irish Sea.

“This extension will allow stakeholders, and especially supermarkets in Northern Ireland, to continue to adapt the supply chains to the post-Brexit situation, something yet to be completed,” he said.

Sefcovic insisted that the only way for the trade to continue in the way described by Frost was for the government to align with EU standards, with a veterinary and food safety agreement modelled on an existing deal with Switzerland.

“I have proposed this solution repeatedly alongside many actors on the ground in Northern Ireland, as it would see 80 per cent of checks required under the protocol disappear in a flash,” he said.

The EU is waiting for the government to make proposals either on Swiss-style alignment or equivalence, mirroring a New Zealand deal, between British and European standards.

The commissioner said he was open to talks and was not drawing a red line on the UK having to follow EU rules, with full enforcement by the European courts.

“This is always a matter of negotiation,” he said. “Therefore we just need to know what is the endgame in these negotiations for the UK. If it is still pursuit of this super-clean Brexit approach, we need to know where, in both sectors and categories, they would like to lower the number of checks and we will have to look at what we could do.”

The flagship of the European compromise package is a major step to change EU law on medicines approval to allow the use of UK-approved treatments and generic medicines to continue as part of the NHS in Northern Ireland.

Another move is an exemption to allow Northern Irish drivers to cross the border into the Republic without an insurance green card.

“These are unquestionable responses to those in the UK who suggest that the EU is inflexible, or too legalistic. Because in some cases, notably on medicines, we have completely turned our rules upside down and inside out to find a solid solution,” he said.

Senior EU officials contrast Sefcovic’s flexibility with Frost’s “purism” on Brexit and the government’s position of refusing the Switzerland model of alignment on food checks.

“There is an ideological quest for purity on Brexit that takes us away from solutions,” one official said.

Speaking at prime minister’s questions shortly before the deal was announced, Johnson said that the chilled meats issue was down to the EU’s interpretation of the protocol: “The best thing the EU can do is to remove all the problems associated with their application of the protocol — the ban on chilled meats, the restrictions on cancer drugs. I hope that all that can be fixed and then we can move on.”

Under the terms of the Brexit withdrawal treaty, Northern Ireland effectively remains in the EU’s single market for goods, including medicines, meaning that checks and other controls are needed on products entering the province to ensure compliance with Brussels rules.

One cabinet minister said this month that the sausages ban was “bonkers”. George Eustice, the environment secretary, accused the EU of having been “slow to engage” on the issue and said he had “no idea” why the EU was imposing “idiosyncratic” rules on the movement of chilled meats. A Brewdog promotion which said customers could win “solid gold” beer cans was misleading, the advertising watchdog has found. The Scottish brewer offered shoppers the chance to find a gold can hidden in cases sold from its online store. But some winners

There is growing concern that free, face-to-face advice which helps hundreds of thousands out of debt each year could be cut. New contracts from the Money and Pensions Service (MaPS), which funds most free debt advice in England, will see more

The Bank of England’s new chief economist has warned that UK inflation is likely to hit or surpass 5% by early next year. Huw Pill told the Financial Times that the Bank would have a “live” decision to make at its

by
Editor's Pick, Investing
Get the daily email that makes reading the news actually enjoyable. Stay informed and entertained, for free.
Your information is secure and your privacy is protected. By opting in you agree to receive emails from us. Remember that you can opt-out any time, we hate spam too!